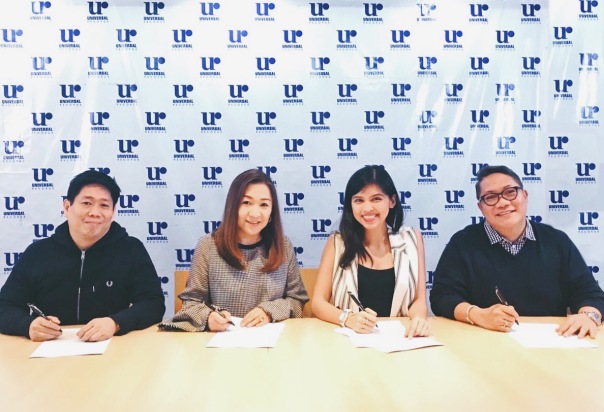 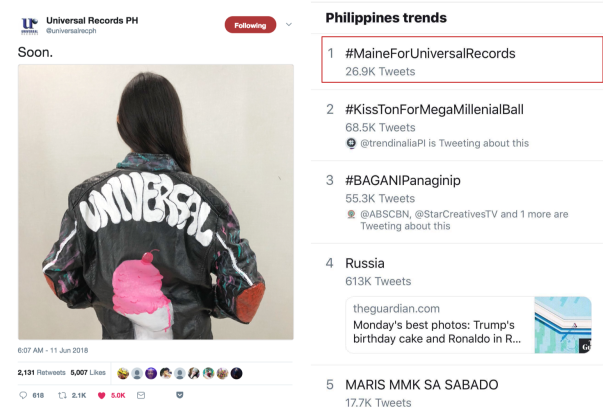 Hints of Maine’s signing first hit the web after Universal Records posted a teaser photo of a ‘mystery girl’ wearing a leather jacket bearing the word Universal on it. Fans were quick to catch on, as #MaineForUniversalRecords became the #1 Trending Topic on Twitter in the Philippines and Worldwide not long after the teaser was posted.

The mystery girl was finally shown to be non-other than Maine herself on June 22, as posted through a Big Reveal video, further exciting her fans.

Signing with Universal Records is just the latest accolade for the 23 year-old star, as she celebrates her third anniversary in show business. Rising to stardom after being introduced as Yaya Dub on the hit noontime show Eat Bulaga, Maine has amassed a number of endorsements, TV shows, box-office hits, and a best-selling book. Now, Maine is more than ready to trade in her dubsmash skills to pursue a recording career, adding to her many talents.

Talking about Maine’s signing, Kathleen Dy-Go, General Manager of Universal Records says “We’re very happy to welcome Maine into the Universal Records family, and very excited to be working with her for her upcoming projects.”

Stay tuned for Maine’s debut single under Universal Records this 2018.

A revelation of Le Petite Couture

(May 23, 2017) After 30 years in the fashion industry, Philippines’ First eco-couture designer John Ablaza, there is no sign of slowing down. Before flying to New York, he spent many hours in creating those mini-couture collection. In May 20, 2017, Ablaza finally revealed the Le Petite Couture during 30 years behind-the-seams at the Amar Estate.

Ablaza said “I am really proud to present to the world my ”  Le Petite Couture ” a collection of about 30 pcs miniature Couture Gowns done 90 percent by hand in 100 days.

I am dedicating this creation to women who matters and each piece will be named after those whose been a part of my 30 seamless and very challenging journey in fashion. This is also my humble contribution to the fashion industry. Will eventually launch this as a traveling exhibit that I intend to showcase in important cities around the world.”

Most fashion shows focuses in Glamour however, John Ablaza 30 years behind the seams more on the charity, whom Ablaza close to his heart especially the less fortunate communities from Zimbabwe to Kenya. 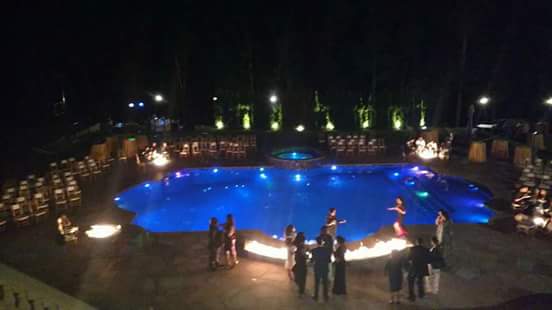 Apart from this,  the people who made the fashion show possible were the organizers,  models,  photographers, media,  volunteers,  make-up artist, sponsors. Special mention to Helsey Lubiano of CHHC Event Planning and Operations,  the Productions Agency: Ronnie and Nanette,  the Same Family,  Chris Labaco,  show director.

Opening Remarks by  Aquino-Thomas before the Fashion Show

According to John Ablaza “Thank you God for an amazing show.. Enchanted Evening !!!!Thank you to.everyone who made this show a great success !!!!”

Humble Beginnings of “Blogtalk with MJ Racadio”
by Viva Alvaro-Galvez 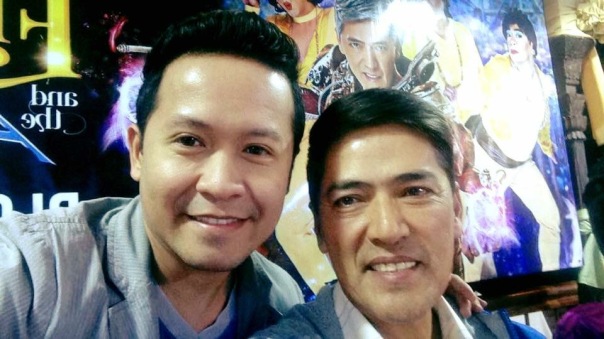 (May 07, 2017) While others choose to work outside home, few choose to do the opposite. Out of the few, some do it for convenience, some do it to balance work and family relationship, but someone just make the most out of it – started conquering the world and inspiring hundreds of thousands of people in the comfort of home.

He was born in Pangasinan, and as a teenager, leaving his hometown for United States was quite easy, with his dreams in mind and heart. He had a dream of making it into Hollywood. Growing up, he always knew he had to do something to fulfill it. He believed and continuously believe in every posibility and so he lived and is still living these dreams.

Graduating from Business Management in University of Phoenix was just the beginning of an amazing journey. When he moved to Los Angeles, it was as if the world calls out his name, turning his dreams into an overwhelming reality.

From being a Recording Artist to a Publicist, a PR expert, an Event Organizer/Producer, a Red Carpet reporter in Hollywood and Fashion runways, to being the Social Media Reporter of the Year (2016) awarded by Filipino American Press Club of California.

He has indeed mastered the art of persistency and passion that never fail to get him through wonderful doors and paths, all on the way to the promise of his dreams.

In an interview, he said it took him a while to notice that he is already living his dreams. When asked about his thoughts about leaving Pangasinan as a teenager, he said “I have been always fascinated with Hollywood growing-up, and when I moved to Los Angeles, I got to live the dream, I would always remember my first red carpet in Hollywood.”

And it indeed just doesn’t stop there. In April, 2014, he tried to come up with something that has never been done before. That’s when the first ever America’s First Fil-Am Hollywood Entertainment Podcasting Show — Blogtalk with MJ Racadio.

He’s now celebrating three years of wonderful episodes married into the power of social media. He said “my vision is clear, and that is to empower and inspire one person at a time, Filipino and Fil-Americans alike through my platform which is the Blogtalk.”

When asked about some of the most memorable interviews during the first season of the show, he would highlight some of the most influencial Fil-Am personalities who have made their marks inn Hollywood. To name some we have Hollywood writers Janet and Ruben Nepales. He even recalled the moment when he got invited by the power couple to Hollywood, and he said “Is this happening?” Because according to him, they usually interview the biggest stars in the planet. Some of the notable interviews he had for the show include 2015 Ms. Universe Pia Wurtzbach, the famous Filipino Balladeer and the first ever Filipino to win WCOPA world grand champion title Jed Madela, to matinee idols Alden Richards and Dennis Trillo.

He never fails to acknowledge the people behind the show’s continuous success. “I thank God for the knowledge he has given me, my Executive Producer Mariebeth Racadio for providing me a never ending support, and of course, my family, my followers, and my friends. Because without them, Blogtalk would not be possible.”

“It’s been a long 3-year journey. I am going to continue as long as I can find someone whom I think is capable of inspiring others. I will try my very best to invite important people for an interview in Blogtalk. As long as I have the resources, and the ability to do it, I will do it, and I will do it for the rest of my life,” he said.

For Immediate Release
Press Release
GLOBAL POP ICON – BRITNEY SPEARS
FINALLY COMING TO MANILA
Manila, Philippines (March 29, 2017). Breaking News: Multi-platinum, Grammy Award-winning pop icon Britney Spears is coming to Manila on June 15, 2017 at the Mall of Asia Arena for her first-ever and much-awaited concert in the Philippines.
Iconic pop sensation Britney Spears is one of the most successful and celebrated entertainers in pop history with nearly 150 million records worldwide. In the U.S. alone, she has sold more than 70 million albums, singles and songs, according to Nielsen Music. Born in Mississippi and raised in Louisiana, Spears became a household name as a teenager when she released her first single “…Baby One More Time,” a Billboard Hot 100 No. 1 smash and international hit that broke sales records with more than 20 million copies sold worldwide and is currently 14x Platinum in the U.S.
Her musical career boasts countless awards and accolades, including six Billboard Music Awards and Billboard’s Millennium Award, which recognizes outstanding career achievements and influence in the music industry as well as an American Music Award and the 2011 MTV Video Vanguard Award. So far, Spears has earned a total of six No.1-debuting albums on the Billboard 200 chart and 22 top 40 hit singles on the Billboard Hot 100 — four of which went to No. 1. Spears has been nominated for eight Grammy Awards and won for Best Dance Recording in 2005.
Her cutting-edge pop concert Las Vegas residency, “Britney: Piece of Me,” at Planet Hollywood Resort & Casino has been voted “Best Show in Las Vegas” and “Best Bachelorette Show in Las Vegas.” Spears has also been creating fragrances for over ten years, and currently has 21 fragrances available in over 85 countries around the world.
Tickets to Britney Spears – Live in Manila will be on-sale beginning April 5 at 10AM. Book online at SMTickets.com or call 470-2222. Presented by Bench and Wilbros Live.
#BlogtalkwithMJRacadio Media Coverage