FILIPINO-AMERICAN COMEDIANS GET LAUGHS FOR CHARITY IN UPCOMING CALIFORNIA TOUR

(Los Angeles, California – August 21, 2015) A sextet of Filipino funnymen will be serving up a “laughapalooza” when Ron Josol, Joey Guila, Justin Rivera, Michael Quu, Keith Pedro and Rembrandt begin a California tour to help raise fund for the Apl.de.ap Foundation International next month. After a successful 2014 tour with SOLD OUT shows in Canada, Southern California and Hawaii, the 2015 “Filipino Comedy Tour” begins Thursday, August 27th in San Francisco (with special guest Rad Reyes), then Los Angeles on Friday, August 28th and a final stop in San Diego on Saturday, August 29th. Acclaimed DJ  R1CKONE will accompany the tour to provide some special performance music. “We are definitely excited for the opportunity to share laughter with our fans and supporters,” said Rembrandt Sabelis, the tour’s producer, “but more importantly, we wanted the opportunity to help our friend Apl.de.ap of the Black Eyed Peas do some good for the sake of the children in the Philippines who need educational opportunities and health treatment.”

The Apl.de.ap Foundation International is a project of the Asian Pacific Community Fund, a non-profit 501c3 organization that is committed to empowering Filipino youth not only in the Philippines, but worldwide.  The Foundation partners and collaborates with organizations on creative and innovate approaches to arts, technology and health care with the goal to provide the tools to individuals, who are passionate and driven to make a difference in their lives and in the lives of others.  Tickets for all performances are available at https://www.eventbrite.com/d/local/filipino-comedy-tour/

Ron Josol represents a new generation of comedy. With his modish comedy style and commanding stage presence, he is one of today’s hottest acts.  He has taken his comedy around the world and has performed in Canada, U.S., Pacific Islands,Persian Gulf, Asia, Central America, the Caribbean and the in the Middle East. In Ron’s 2nd year performing as a comedian, he won the coveted Craven A’s funniest Homegrown Competition at the Just For Laughs Comedy Festival. Since then he has been performing regularly at various Festivals including, the Winnipeg Comedy Festival, Just For Laughs Festival, the International Comedy Fest 2K8, The Orange County Comedy Festival and the LOL Comedy Festival in Hollywood, California. Indubitably, the most recognizable Asian comedian in Canada, Ron was profiled on the Comedy Network, ABS-CBN Asia, Show time Dubai, CBC, Discovery Channel, Echo, Omni 1&2, MTV Canada, and recently the Biography Channel in Canada. Ron has hosted his own television series on Omni 2’s network called, “FLIP”. He produced, co-wrote and starred as the lead of a short film based on his true story entitled, “Rolling Longaniza,” which aired on CBC Zflicks. He has written and performed on Much Music hit shows “Video on Trial” and “Much More Music”.  Ron has taped numerous stand-up comedy specials in his career, including, “Ethnical Difficulties” for CBC, where he was nominated for a Canadian Comedy Award for that performance, “Comedy Now”, on CTV/Comedy network. He has been featured in ABS-CBN’s Slanted comedy taped at the San Jose Improv and recently recorded 2 comedy specials produced by Showtime Dubai. This lead to his first US television appearance on LOL Comedy Festival on Showtime USA. Ron was recently featured on Last Call with Carson Daly.

If laughter is medicine, comedian Joey Guila has the prescription. This San Francisco native brings happiness to any event just as long as he isn’t paid in rolls of nickels. He is a complete entertainer that takes the audience through a journey of Old School and New School, his multicultural style of comedy hits home for all audiences.  Before Comedy he was a licensed cosmetologist working at the Jose Eber Salon in Beverly Hills and voted most macho eyebrows. He still laughs at the fact that he was the only straight Filipino Hairdresser on Rodeo Drive. In 2003 Joey won the regional “Kings Of Comedy” competition ran by Latham Entertainment who is the founder of “The Original Kings Of Comedy” which include, Bernie Mac,Cedric The Entertainer, D.L. Hughley and Steve Harvey. Joey was invited to perform with Latham Entertainment at the MGM Grand in Las Vegas and the Universal Amphitheater in Hollywood.

Joey has done voice overs for the Nutshack Cartoon and has been featured on VH1, G4 Tech TV, Showtime (Pacific Rim Comedy with Edwin San Juan) and on HBO with P Diddy’s comedy special. He was recently coast to coast on the Verizon APAHM Tour and the Headliner on The Filipino Kingz Tour. He has hosted two T.V. Shows on Myx TV called “Thats My Jam” and “Myx Rated” which recently won a Telly Award. His past guests have been Justin Bieber, PitBull, Boyz II Men, Naughty By Nature, Jason Derulo and Amerie. Joey has also opened for Al B. Sure, Black Eyed Peas,The Jabbawockeez and Bruno Mars.

When he is not on Tour he enjoys eating rice 4 times a day and watching Brady Bunch in Tagalog. Joey says he is living his dream and now wants to be the first Islander on Cribs to have a chandelier in his mobile home.

Justin Rivera is a full-time professional magician and comedian from the Magic Castle in Hollywood and the Improv comedy clubs in California, who was recently named a judges’ favorite on NBC’s America’s Got Talent.  He has performed at many colleges, the Consumer Electronics Show in Las Vegas, the South Point Hotel & Casino in Las Vegas, and the Pechanga Resort & Casino in Temecula, CA. and has been seen on Fast Track to Fame on the Speed Channel and The Gong Show on Comedy Central with Dave Attell and Adam Corolla. He has also opened for headlining comedians Jo Koy, Russell Peters, Rex Navarrete, and Edwin San Juan.

People may have seen Keith Pedro on “Degrassi” or MTV or even heard him on CBC Radio, but this high energy comic has been touring all across North America ripping stages and cities in his path! He is currently one of the cast members of Much Music’s “Video on Trial” and also writes and performs sketch comedy with the edgy Toronto sketch troupe “The Boom.” Watch out, this pack-a-punch comic with his witty punch lines will give the audience a free abs workout!

Born and raised on Long Island, Michael Quu (pronounced Q), started his comedy career in New York City. Michael honed his skills at clubs and open mics winning several local comedy contests before finally moving to Los Angeles where he quickly became a club favorite.  Full of energy, Michael delivers huge laughs with quick paced stories about his personal life and quirky observations. He can be seen regularly Monday night’s at The Comedy Store Main Room in Hollywood on the Comedy Madness show. 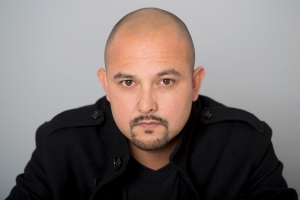 Born in Toronto Canada, Rembrandt was discovered in 1991 at a local Canadian talent search that brought him to LA to compete in a international competition. Rembrandt drew interest from many Hollywood agents and decided to move to Hollywood later that year. Rembrandt’s career in the entertainment industry took off in 1992 when he landed the series regular role of Lucky London on the syndicated TV show Superhuman Samurai Syber Squad followed by appearances on Beverly Hills 90210 and Boy Meets World just to name a few. In 1996 with his career at its highest point Rembrandt walked away from the industry for personal reasons. After 18 years away from the entertainment industry Rembrandt is back with a new look and passion as he enters the stand-up comedy scene. With edgy comical views from his days of being a child star. To walking away from it all, marriage, divorce, kids and becoming homeless. Rembrandt brings laughter through a very unique first person prospective of family, fame, fortune, and rock bottom. Transforming his pain into laughter.

Rick Dixon a Filipino American p/k/a R1CKONE of 3013 Music Group is a world class DJ and Music Producer. Once becoming the DJ for an underground Hip Hop group called Blood of Abraham in the year of 99 he then met his biggest influences in music, and those were the people within the circle of the whole Black Eyed Peas family. Polo Molina of Grassroots and BEP management gave R1CKONE his fi rst shot in the LA circuit, from that day he has deejayed  for the Oscars, Grammy’s, A-list celebrities, network and corporate events for fi lm, TV, shoe, clothing companies and had residences worldwide. With his skills and knowledge of music he was chosen to be the exclusive DJ for Fred Segal in Santa

Monica, the DJ for will.i.am’s line “I.Am” clothing and even taught the fundamentals during after school programs in conjunction with the Black Eyed Peas Peapod. R1CKONE was mentored by and learned the craft of making music by being in years of studio sessions with Monroe “DJ Motiv8”  Walker and will.i.am, since becoming a Music Producer he has worked with some of the most influential people in the industry, he helped craft the sound for hits like “Hey Mama” by the Black Eyed Peas; and “Paper Doll” by Sharon Little where he worked  with legendary producer Don Was (The Rolling Stones, Bob Dylan).