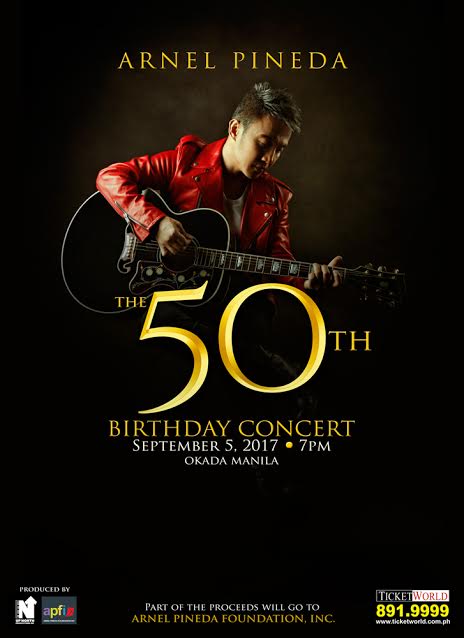 July 04, 2017(Manila, Philippines). Partake in a heartfelt celebration of Arnel Pineda’s colorful life as he turns 50. The Filipino rockstar is marking his golden year with an intimate birthday dinner show at Okada Manila, where he will be singing the songs of his life. The night’s setlist follows Arnel’s life story, from his beginnings in local bands to conquering the world stage as frontman of the legendary Journey. The artist will delight the audience with renditions of his personal favorites and original compositions. Surprise performances await both the audience and the artist himself.  With acclaimed video and event director Paul Basinillo at the helm, the night will surely create lasting impressions for those in attendance.

Our Cause
Arnel’s humble beginnings has shaped him into a man of goodwill. Majority of the event’s proceeds will go to the Arnel Pineda Foundation, Inc. (APFI), a non-stock, non profit, and independent foundation that provides underprivileged children quality education, health services and medical attention. Arnel and his family personally oversee the Foundation and are always present in its events.

Arnel Pineda is the lead singer of celebrated American rock band, Journey. Since landing the coveted gig in 2007, he has showcased his powerful pipes at the biggest venues including the Hollywood Bowl, Wembley Arena, and Tokyo Budokan. He has collaborated with the likes of Foreigner, Deep Purple, Santana, Joan Jett, Rascal Flatts among others.

Arnel was born on September 5, 1967 in Sampaloc, Manila. After his mother’s illness and eventual death put the family in a dire financial situation, he volunteered to live independently, taking on odd jobs to provide for himself at the age of 14. At 15, he became the lead singer of the band, Ijos. In 1986, along with some members of Ijos, he formed Ammo and the band went on to win the Rock Wars contest. In 1988, Ammo won the Philippine leg of the Yamaha World Band Explosion and competed in Hong Kong for the finals.  In 1990, Pineda and other Ammo members formed another band called Intensity Five which came first runner-up at the Yamaha World Band Explosion, with Arnel winning Best Vocalist. Arnel also fronted the bands New Age, 9mm, Most W@nted, and Zoo.

Okada Manila impresses anyone who enters its halls. This biggest and grandest integrated resort in the country occupies an astounding 44 hectares of land in the Entertainment City.With a five-star hotel, a wealth of dining destinations, exciting retail options, and gaming experiences, Okada sets the bar high in the hospitality and gaming scene.

Tickets to the event are now out at Ticketworld branches and online at ticketworld.com.ph. A seat is PHP 7,040.40, inclusive of a full-course sit-down dinner and covering tax and other mandated charges.  For inquiries, get in touch with Up North Productions at upnorthproductionsinc@gmail.com, or at mobile number +63 917 652 7463.